You can create a process pool using the multiprocessing.pool.Pool class.

In this tutorial you will discover the multiprocessing process pool in Python.

What is a Process

A process is a computer program.

Every Python program is a process and has one thread called the main thread used to execute your program instructions. Each process is, in fact, one instance of the Python interpreter that executes Python instructions (Python byte-code), which is a slightly lower level than the code you type into your Python program.

Sometimes we may need to create new processes to run additional tasks concurrently.

A task can be run in a new process by creating an instance of the multiprocessing.Process class and specifying the function to run in the new process via the “target” argument.

Once the process is created, it must be started by calling the start() function.

You can learn more about running a function in a child process in the tutorial:

We can then wait around for the task to complete by joining the process; for example:

Whenever we create new processes, we must protect the entry point of the program.

Tying this together, the complete example of creating a Process to run an ad hoc task function is listed below.

This is useful for running one-off ad hoc tasks in a separate process, although it becomes cumbersome when you have many tasks to run.

Each process that is created requires the application of resources (e.g. an instance of the Python interpreter and a memory for the process’s main thread’s stack space). The computational costs for setting up processes can become expensive if we are creating and destroying many processes over and over for ad hoc tasks.

Instead, we would prefer to keep worker processes around for reuse if we expect to run many ad hoc tasks throughout our program.

This can be achieved using a process pool.

What is a Process Pool

A process pool is a programming pattern for automatically managing a pool of worker processes.

The pool is responsible for a fixed number of processes.

The pool can provide a generic interface for executing ad hoc tasks with a variable number of arguments, much like the target property on the Process object, but does not require that we choose a process to run the task, start the process, or wait for the task to complete.

Python provides a process pool via the ProcessPoolExecutor class.

You can learn more about the ProcessPoolExecutor class in the tutorial:

Python also provides a process pool via the multiprocessing.pool.Pool class.

What is the Process Pool Class

The multiprocessing.pool.Pool class provides a process pool in Python.

It allows tasks to be submitted as functions to the process pool to be executed concurrently.

A process pool object which controls a pool of worker processes to which jobs can be submitted. It supports asynchronous results with timeouts and callbacks and has a parallel map implementation.

To use the process pool, we must first create and configure an instance of the class.

Once configured, tasks can be submitted to the pool for execution using blocking and asynchronous versions of apply() and map().

Once we have finished with the process pool, it can be closed and resources used by the pool can be released.

Next, let’s take a closer look at each of these aspects in turn.

Download my Pool API cheat sheet and as a bonus you will get FREE access to my 7-day email course.

Discover how to use the Multiprocessing Pool including how to configure the number of workers and how to execute tasks asynchronously.

How to Configure the Process Pool

The process pool is configured via the class constructor.

All arguments to the constructor are optional, therefore it is possible to create a process pool with all default configuration by providing no arguments.

The first argument is “processes” that specifies the number of workers to create and manage within the pool.

By default this equals the number of logical CPUs in your system.

Each worker process may prepare resources used within that process by executing tasks.

This can be achieved by configuring an initializer function to execute by each worker process. The “initializer” argument specifies the name of the function and the “initargs” specifies any arguments to the function.

Each worker process in the pool is a separate child process.

It is possible for child processes to become unstable or accumulate resources without releasing them, such as if there are subtle bugs in the tasks that are being executed.

A frequent pattern found in other systems (such as Apache, mod_wsgi, etc) to free resources held by workers is to allow a worker within a pool to complete only a set amount of work before being exiting, being cleaned up and a new process spawned to replace the old one. The maxtasksperchild argument to the Pool exposes this ability to the end user.

The number of tasks that may be executed by each worker process can be set via the “maxtasksperchild” argument, which defaults to no limit.

Finally, we can configure the process context used to create child processes.

Recall that a process context defines the start method used to create child processes, such as ‘fork‘ or ‘spawn‘, and provides an implementation of the multiprocessing API using the configured context.

You can learn more about start methods in the tutorial:

You can learn more about process contexts in the tutorial:

We can create a new process context with a given start method, then pass this to the process pool to create all child processes via the “context” argument. If not set, the current context is used by default.

Now that we know how to configure the process pool, let’s look at how we might submit tasks.

How to Submit Tasks to the Process Pool

There are four ways to issue tasks to the process pool.

The apply() function will submit a task to the process pool that executes a function with the given arguments.

It is used for one-off function calls to be executed by a worker process and specifies the function to execute and any arguments to the function.

Recall that the built-in map function will call a specified function for each item on a provided iterable.

The map() function on the process pool performs the same action, except that each function call on an item in an iterable is executed by a worker process.

A common idiom for using map() is to iterate the results returned from the function call.

Unlike the built-in map() function, the pool version of map() only supports one iterable instead of multiple iterable, and all items are iterated and submitted as tasks instead of being lazily evaluated.

The starmap() function can be used for a version of map() that supports an arbitrary number of iterables.

Each approach for issuing tasks to the process pool has both a blocking (synchronous) and a non-blocking (asynchronous) version.

The functions for issuing tasks to the process pool listed above, apply(), map(), imap(), and starmap() are all blocking function calls.

The non-blocking or asynchronous versions of these functions have a _async suffix, for example:

The imap_unordered() function will return results out of under, e.g. in the order the tasks complete, unlike the imap() function.

The apply_async() function allows callback and error handling functions to be specified and called automatically once the issued task is complete.

The map_async() and starmap_async() versions of the functions for issuing tasks return an instance of the AsyncResult class for each task that provides a mechanism for getting the results of the submitted tasks once they are completed.

Next, let’s take a closer look at the AsyncResult class.

What is the AsyncResult Class

The multiprocessing.pool.AsyncResult represents a result from a task issued asynchronously to the process pool.

It provides a mechanism to check the status, wait for, and get the result for a task executed asynchronously in the process pool.

An instance of the multiprocessing.pool.AsyncResult class is returned for each task submitted by both the map_async() and starmap_async() functions.

For example, a call to map_async() for a function task() with an iterable of ten items, will return a list of ten instances of the multiprocessing.pool.AsyncResult class.

We can wait for a task to complete via the wait() function.

If called with no argument, the function call will block until the task finishes. A “timeout” can be provided so that the function will after a fixed number of seconds if the task has not completed.

Finally, we can get the result from the task via the get() function.

If an exception was raised while the task was being executed, it is re-raised by the get() function in the parent process.

Finally, a “timeout” argument can be specified when getting the result. It will return when the task is finished or after the fixed number of seconds have elapsed after which a time multiprocessing.TimeoutError is raised.

Next, let’s look at how we might close down the process pool.

How to Close the Process Pool

The process pool can be closed once we have no further tasks to issue.

We can call the close() function to close down the process pool once all the currently issued tasks have completed.

Prevents any more tasks from being submitted to the pool. Once all the tasks have been completed the worker processes will exit.

The close() function will return immediately and the pool will not take any further tasks.

Alternately, we may want to forcefully terminate all child worker processes, regardless of whether they are executing tasks or not.

This can be achieved via the terminate() function.

We may want to then wait for all tasks in the pool to finish.

This can be achieved by calling the join() function on the pool.

I would also recommend specific chapters from these books:

You now know how to create and use a process pool in Python.

Photo by Brett Jordan on Unsplash 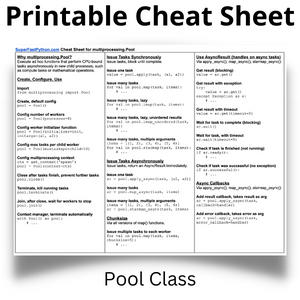