You can show progress of tasks in the ThreadPoolExecutor by using a callback function.

In this tutorial, you will discover how to show progress of tasks in a Python thread pool.

Need to Show Progress of Tasks in the ThreadPoolExecutor

The ThreadPoolExecutor in Python provides a pool of reusable threads for executing ad hoc tasks.

You may need to show progress of all or a subset of tasks submitted to the thread pool with the submit() function.

This may be for many reasons, such as reporting progress to the user or internally keeping track of how much time or work remains to be completed.

How can we show progress of completed tasks in the ThreadPoolExecutor in a standardized way?

Use add_done_callback() to Show Progress

You can add a callback function to provide a standard way to track progress for completed tasks.

This can be achieved by calling the add_done_callback() function on the Future object for each task and specifying a custom function to track or report progress.

Recall that we get a Future object when calling the submit() function on the ThreadPoolExecutor when submitting a task.

The callback function must have a single argument, which is the Future object on which it was called.

Using a callback is not the only way to show progress. For example, you can enumerate tasks as they are completed in the main thread via the as_completed() function.

The problem with this approach is that it requires that you mix both result processing and task progress indication code together, which may be less clean than using a callback function.

The callback function will only be called when the task is completed, e.g. “done”.

A task may be completed in one of three ways:

As such, you may want to check the status of the task to see if it was cancelled or if an exception was raised in the callback function before reporting on the progress.

There are many ways to report progress in the callback function.

For example, you can print a character, one for each task that is completed.

Now that we know how to show the progress of tasks in a standard way, let’s look at a worked example.

Example of Showing Progress of Tasks

Let’s look at how we might show the progress of tasks completed in the ThreadPoolExecutor.

First, let’s define a mock task that sleeps for a fraction of a second.

Next, we can define our callback function that will take a Future object and report progress by printing one character for each task that completes.

This is a generic and scalable way of showing progress for tasks, although it does not provide an indication of how many tasks remain to be executed.

Next, we can create a thread pool with two threads and submit many tasks.

We can then register the callback with each task, which will be executed after each task has completed.

Tying this together, the complete example of showing a progress indicator of completed tasks is listed below.

Running the example creates the thread pool and submits twenty tasks for execution.

The tasks complete one-by-one, reporting the progress of completed tasks with printed dots.

Once all 20 tasks have completed with all 20 dots printed, we can carry on with our program.

Download my ThreadPoolExecutor API cheat sheet and as a bonus you will get FREE access to my 7-day email course.

Discover how to use the ThreadPoolExecutor class including how to configure the number of workers and how to execute tasks asynchronously.

How to Count Tasks Completed

We may want to report the total number of tasks that have completed and/or the total tasks that remain to be executed.

This requires a counter of the total number of tasks completed so far.

Multiple threads may try and update or report values from the counter at the same time, which may make the counter inconsistent or report incorrect values.

Reading and writing the counter must be made thread-safe, e.g. an operation that only one thread can perform at a time.

This can be achieved using a threading.Lock class, which must be acquired before the counter can be updated or reported.

The lock can be acquired using a context manager, ensuring it is released automatically once we are finished with it.

We cannot pass objects to the callback function or store data in the Future object for the task, so this approach would require the use of global variables or to occur within a thread that keeps track of tasks as they are completed via the as_completed() function.

Let’s use global variables for the lock, the counter, and the total number of tasks and access them from the callback function called by the ThreadPoolExecutor as each task is completed.

The updated callback function to report the total complete and total remaining tasks in the thread pool is listed below.

Tying this together, the complete example of keeping track of the number of complete and remaining tasks is listed below.

Running the example creates the thread pool, submits the tasks, and registers the callback function as before.

As tasks complete, the updated callback function is used, first updating the counter, reporting the total complete and total remaining tasks in a thread-safe manner, governed by a lock.

I also recommend specific chapters from the following books:

You now know how to show progress of tasks in the ThreadPoolExecutor.

Do you have any questions about how to show progress of tasks?
Ask your questions in the comments below and I will do my best to answer.

Photo by Zoltan Tasi on Unsplash 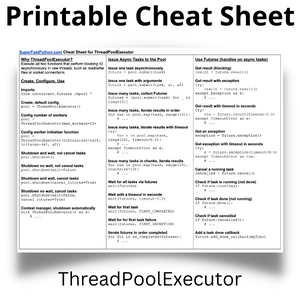